Career and Jobs in India

Software engineering has been the most opted for engineering degree in the last two decades in India. Ever since companies like TCS, Wipro and Infosys found a global foothold along with the established Indian firms like HCL and others, high school pass outs have aspired to become software engineers. The IT industry exploded, particularly for India, at the turn of the century and millennium when India played a pivotal role to change the dynamics of the global tech race. Over the last decade and a half after having solved the world’s major tech problems, India remains to be the global IT hub.

Software engineering can be signed up for at reputed colleges like the IITs and there are small private institutions as well. Where you would sign up for would determine what quality of education and training you would receive. Software engineering is more about technical skills and training than subjective education. It is unlike other conventional engineering degrees where there is exhaustive courseware but limited scope of personalization. Besides, software engineering has multiple specializations and you have to choose wisely to find what you can do best. 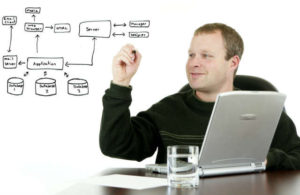 The specialization in software is also subdivided into several categories. You can choose the software language, you can decide what kind of software development you may want to do, you might be a programmer, coder, decoder or designer who wouldn’t work on technical algorithms but on the design elements of any software. All such finer details need to be taken into consideration while opting for software engineering.

Network engineering predominantly deals with networking and communication, which are both primarily subjects categorized under hardware sections of information technology. However, you do have to get trained extensive in computer science, software, databases, embedded systems, information systems, general IT and several other specific subjects.

Network engineering needs you to pass your twelfth standard with a desired percentage of marks that would be higher than the cutoff for entrance or admission tests. You need to sit for entrance tests like JEE or AIEEE to get enrolled in reputed institutions. However, there are many private and unrecognized colleges or institutes which offer network engineering. The degrees from such institutes wouldn’t be of as much value as one from IIT or a similar recognized institute of repute.

Network engineering jobs are galore in India and abroad. India is the IT hub of the world and naturally there would be more IT jobs in the country than anywhere else. With the domestic telecom and IT market expanding along with the increasing use of internet and other advanced communications systems in the country, network engineers would find lucrative opportunities in India right now and in the near to distant future.

To sign up for a mechanical engineering course or degree, you must pass your twelfth standard exam or an equivalent of 10 + 2. You should have science in your high school or at eleventh and twelfth standard which must include physics, chemistry and math. Some colleges and institutes also require you to have computers in your twelfth standard academic curriculum. You need to have a certain desired percentage mark to sit for the entrance or admission tests, passing which you can choose the college or institute wherefrom you would get your mechanical engineering degree.

In the courseware of mechanical engineering, you would have to cover mechanics, thermo science and thermodynamics, structural analysis and prototyping of machines and concepts, kinematics, computer-aided design and manufacturing, turbo machinery, production engineering, combustion systems, acoustics, nanotechnology, mechatronics, computational fluid dynamics, robotics and tribology, micro-electro mechanical systems among others.

The best institutes of mechanical engineering in India are albeit the IITs but there are many private institutes that have become equally reputed in the last decade. You may also opt for some autonomous universities in major metropolitan cities in India such as Delhi, Kolkata, Chennai or Mumbai. There are a few popular institutes in Bangalore and Hyderabad as well among other cities in other states.

Electrical engineering is one of the most rewarding courses in India at the moment. About a decade or two back, electrical engineering was a degree that people signed up for to work for industries and at factories, workshops or in large scale manufacturing units. Today, the scope of electrical engineering has widened because of the huge scale prevalence of consumer electronics and electrical appliances that are used at homes and commercial places around the country.

To become an electrical engineer, a person must graduate from or pass high school. One should have physics, chemistry and math in their twelfth standard and should have a certain percentage of marks. For most entrance tests and for most institutes, the cut-off mark to be considered for the admission test or an interview is 50% in all three subjects, namely physics, chemistry and math. Some private institutes even demand that you should have had computers in your twelfth standard and a certain mark obtained at the board exams.

The scope of jobs in electrical engineering is unprecedented. India hasn’t been a power surplus country in the 20th century but over the last ten years, villages, rural areas and even some remote corners of the country have started getting power, if for only a few hours. This has allowed families to buy electrical products. The availability of power has paved the way for industries and businesses in far-flung areas. Naturally, the electrical and electronics market has expanded unprecedentedly in the last decade. At such a time, professionals with electrical engineering degrees can find jobs in cities, suburban areas and towns and even in semirural villages. In the near future, the consumer electrical and electronics industry would explode further and naturally electrical engineering is a very rewarding degree to possess.

To sign up for a diploma course, you may not complete your twelfth standard in some cases. Having passed the tenth standard, you can sign up for the diploma course. For the degree course which will fetch you a B.E. or B. Tech degree, you need to graduate from high school, which is the twelfth standard, with a certain percentage of marks. The desired percentage of marks varies from state to state and in accordance with the cut-offs required by different admission or entrance tests. You must have had science in your twelfth standard, particularly math, physics and chemistry. You may not have biology and instead may have computer science as your optional fourth science subject in high school.

Before you can enroll yourself for a civil engineering course at a reputed college, university or institute, you need to appear for an entrance test. There are many types of entrance tests, some are conducted by state governments, some are conducted by central or federal governments and some tests are conducted by autonomous educational bodies. There are national, regional and state level entrance tests which you have to pass to sign up for a civil engineering course. Your rank would determine if you can enroll yourself and the specific rank and demand for the course will decide what colleges or institutes you can apply for. The IITs are the hardest to get into while there are many private or new institutions which do not require a very high rank in the entrance tests.

Civil engineering is a rewarding degree, especially because India is poised for industrial and infrastructural growth. Whenever there is rapid urbanization, industrial development and the need for basic and state of the art infrastructure across a region or a country, civil engineers are among the most in demand because they are the backbone of construction and development. The job prospects for civil engineers are unprecedentedly high at this point in time and would remain so for at least two decades if not more.

Chemical engineering delves into many diverse fields which can be anything from healthcare to food processing, specialty chemicals to electronics, biotechnology to advanced materials, microelectronics to environmental health, design or construction of infrastructure to manufacturing, textiles or polymers and business services.

Chemical engineers find work in various industries which can range from construction, operation to design, installation to maintenance of plants, designing concepts to manufacturing chemical products, monitoring or supervision of chemicals and chemical plants, chemical extraction, mining to almost every industry you can think of.

To sign up for a chemical engineering course or degree, you must pass your twelfth standard exam or an equivalent of 10 + 2. You should have science in your high school or at eleventh and twelfth standard which must include physics, chemistry and math. Having biology and computers would also be a plus. You need to have a certain desired percentage mark to sit for the entrance or admission tests such as JEE or AIEEE, passing which you can choose the college or institute wherefrom you would get your chemical engineering degree.

You can opt for a degree in chemical engineering or you can get a diploma. For a diploma, you can be a tenth pass out but for a degree you have to pass your high school, twelfth standard or an equivalent. Degrees take about four years while diplomas take three years. You can opt for higher studies after a degree as well as after getting a diploma. Many people opt for a BSC in chemistry and then opt for specializations or diplomas. Chemical engineering is more extensive than a bachelor in science with a major or honors in chemistry.

The career prospects of chemical engineers have always been very high in western countries. India is steadily opening up its mining sectors and is becoming aggressive with its gas explorations and its chemical industry in general. Chemical engineers can find lucrative opportunities today in India itself.

If you’re ready to find a Engineering Job, check out our listings: